ACCORDION
Ontario By The Numbers

Learn more about our City with the Ontario by the Numbers Series!

Check out our newest edition of Ontario by the Numbers,
and download past editions below!

Your information source for Ontario economic growth and population demographics. The State of California Department of Finance population estimates for Ontario is 166,134. The city's current area covers approximately 50 sq. miles.

Founded as a Model Colony, based on innovation, planned development, community service and family values, the City of Ontario has become the economic heart of the region. The City Council is committed to maintaining Ontario's leadership role in the Inland Empire by continuing to invest in the growth and evolution of the area's economy while providing a balance of jobs, housing, and educational and recreational opportunities for our residents in a safe, well-maintained community.

A Partnership That Works!

The Ontario Sister City Committee was founded and organized on July 19, 1975. Ontario's first sister city affiliation occurred on January 18, 1977, when Ontario City Council and the Mayor passed Resolution 8100 officially adopting Brockville, Ontario, Canada, home of the Chaffey Brothers who founded Ontario, California. Since that time, other cities have been chosen because of their similarities to Ontario and their willingness to develop friendships and cultural exchanges. Ontario has formed affiliations with Winterthur, Switzerland; Guamuchil, Los Mochis & Mocorito, Sinaloa, Mexico (1982); and Jieyang, China. Originally formed as a city committee, Ontario Sister Cities became a nonprofit corporation in December 7, 1979, because of its widespread acceptance and grand success.

The Sister City program was launched as a national concept at the White House in 1956, when President of the United States, Dwight D. Eisenhower called for massive exchanges between Americans and people of other nations. Originally proposed as the people-to-people program, and as part of the National League of Cities, SCI became independent as a nonprofit organization in 1967. Sister Cities International is the national membership organization for sister city state programs in the United States, and currently represents more than 2,100 communities in 121 countries around the world. Ontario Sister Cities is a member of the SCI network.

It was in the first week of August, 1881 when George Chaffey, a Canadian engineer, viewed the wastes known as the Cucamonga Desert and decided that this patch of land, if properly watered, could become productive and profitable. George and his brother William bought the "San Antonio lands," 6,218 acres with water rights for $60,000. This was the nucleus of their new model colony. They subsequently expanded to the Southern Pacific Railroad tracks on the south. On the north, they took in the Kincaid Ranch at San Antonio Canyon, an all-important source of water. 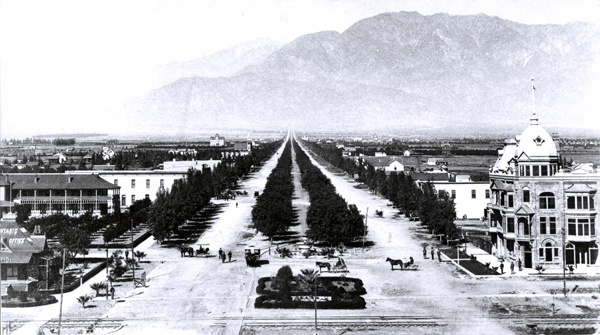 The Ontario Colony lands were quickly surveyed and went on sale in November, 1882. The centerpiece was Euclid Avenue, eight miles long and two hundred feet wide, the twin "driveways" separated by a parkway which was seeded in grass and lined with pepper trees. George named Euclid Avenue after the great Greek mathematician whose book Elements of Geometry had been a favorite subject for George in school. 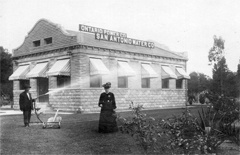 The primary requirement, which had to be met before the land could be utilized, was that water had to be found and brought to the town. Chaffey laid miles of cement pipe for this purpose and later the San Antonio Water Co. drove a tunnel into the head of the canyon to tap the underground flow—then an innovation in the field. The need for electric power to lift water from deep wells led to the establishment of the Ontario Power Co.

Another innovation in the settlement of Ontario was the provision, whereby, purchasers of land automatically received shares in the water company. This would ensure purchasers that a share of water proportional to their acreage would be piped to their land. This eliminated many problems that faced settlers elsewhere, where land rights and water rights were kept separate. 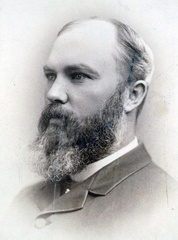 The results of George Chaffey’s labors showed what could be achieved. All too soon, however, the Chaffey brothers went off to Australia to attempt a repeat performance of their success as city planners here.

Charles Frankish became the guiding force during Ontario’s early years. No matter what the activity he undertook, Frankish always threw himself into his work and was determined to do the best possible job.

In 1887, Ontario’s unique "gravity mule car" made its first run on Euclid Avenue. Charles Frankish and Godfrey Stamm established the Ontario and San Antonio Heights R.R. Co. Engineer John Tays of Upland added the pull-out trailer that allowed the mules to coast downhill after each laborious pull from Holt to Twenty–Fourth Street. The mule car served until 1895, when it was replaced by an electric streetcar and returned temporarily when a flood damaged the electrical generator in the powerhouse.

On Dec 10th, 1891, Ontario was incorporated as a city of the sixth class under the California Constitution. It adopted a City Council-City Manager form of government. The mayor was at first called the "President of the Board," and was chosen by the Council, or the Board of Trustees as it was then called, from among their number. Subsequently, the law was changed to allow the people to elect the mayor directly. 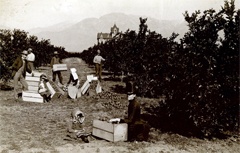 Ontario first developed as an agricultural community, largely but not exclusively devoted to citrus. A few of the lovely Victorian "grove houses" still survive, relics of the days when growers could pretend that they were living the graceful lives of the old Spanish dons—until it came time for harvest.

Chaffey College, which was located where the Chaffey brothers put it until 1960, originally emphasized agricultural subjects to give the growers a hand. It was there that Prof. George Weldon developed the Babcock peach, an adaptation to California’s mild winters. The college has moved to Rancho Cucamonga now, but Chaffey High School is still on what was originally a joint campus.

Even though the groves have gone from the West End, Ontario is still close to the "ton-mile center" of the industry. In addition to oranges, the production of peaches, walnuts, lemons and grapes was also important to the growth of Ontario and the adjoining city of Upland. 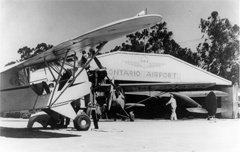 In 1923, Judge Archie Mitchell, Waldo Waterman, and some other airplane enthusiasts established Latimer Field. From that time on, the town became increasingly aviation conscious. Urban growth pushed the fliers progressively east, until they took up their present location, the Ontario International Airport. During World War II, this was a busy training center for pilots of the hot Lockheed P-38 "Lightning" twin-boom fighter.

Since World War II, Ontario has become a much more diversified community. The mean temperature of 61 degrees and the average rainfall of 18.4" continues to attract more residents. The city has expanded from the 0.38 square mile area incorporated back in 1891, up to almost 50 square miles. The economy now reflects an industrial and manufacturing base. Ten thousand acres are zoned for industrial use. With three major railroads, the San Bernardino, Pomona, and Devore Freeways (10, 60, and 15), and the Ontario International Airport. Ontario is well provided with major transportation resources. Its proximity to Los Angeles ensures that Ontario will continue to grow in the years ahead.

Ontario’s official song is "Beautiful Ontario," written by Paul Coronel in 1960. The official flower is the Charlotte Armstrong rose, developed by local nurseryman John Armstrong and named for his first wife. At different times, Ontario has adopted as its slogan or motto each of the following: The Model Colony; The Model City; The City That Charms; Ontario Offers Opportunity; Pulse of the Inland Empire; Stop and Grow with Ontario; Gateway to the Inland Empire; A Balanced Community; The Gateway to Southern California; and Southern California's Next Urban Center.

Every 1st and 3rd Tuesday of each month at 6:30 PM. Meetings are currently&nb...

The Ontario City Council meets every 1st and 3rd Tuesday of each month. Meeti...

Every 1st and 3rd Tuesday of each month at 6:30 PM. Meetings are currently&nb...

Stay informed with the latest updates.